After a few weeks in Singapore, I began feeling really at home. At first I moved around alot: from my hostel in Chinatown to Liz and Arif’s apartment in Bishan, to Patricia’s apartment where I live now. I found Liz and Arif through AirBnB just in time to have an accomodation ready for my Mom’s arrival. The apartment was beautiful, and Liz and Arif kindly suggested places in and out of Singapore that I could visit. I really enjoyed talking with them in the mornings and evenings. I would have loved to stay longer, but Liz’s parents were coming to visit and they needed the room. 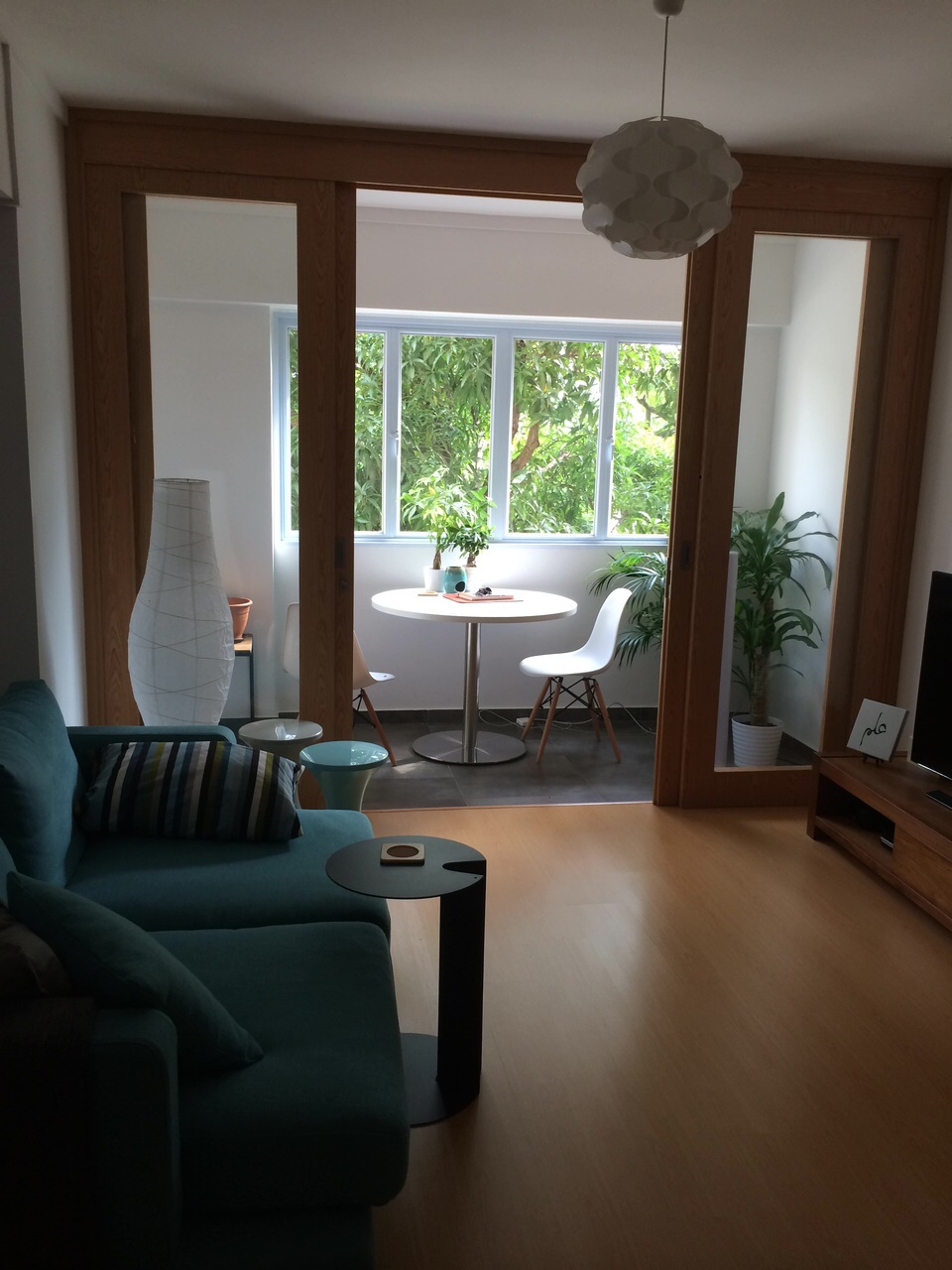 It was a little difficult to find a place that would be willing to rent a room for such a short period of time. Thankfully I found Patricia, who welcomed me to her condo near Holland Village. The morning after I arrived, Patricia walked with me around the neighborhood to show me the nearby grocery stores, MRT stations, and resturaunts. It was so nice of her to spend so much time showing me around! The condo has a gym and a beautiful pool. I use the gym and meditate by the pool in the morning before work. LOL ok I meditated once. For seven minutes. But I do actually use the gym when I wake up on time :) 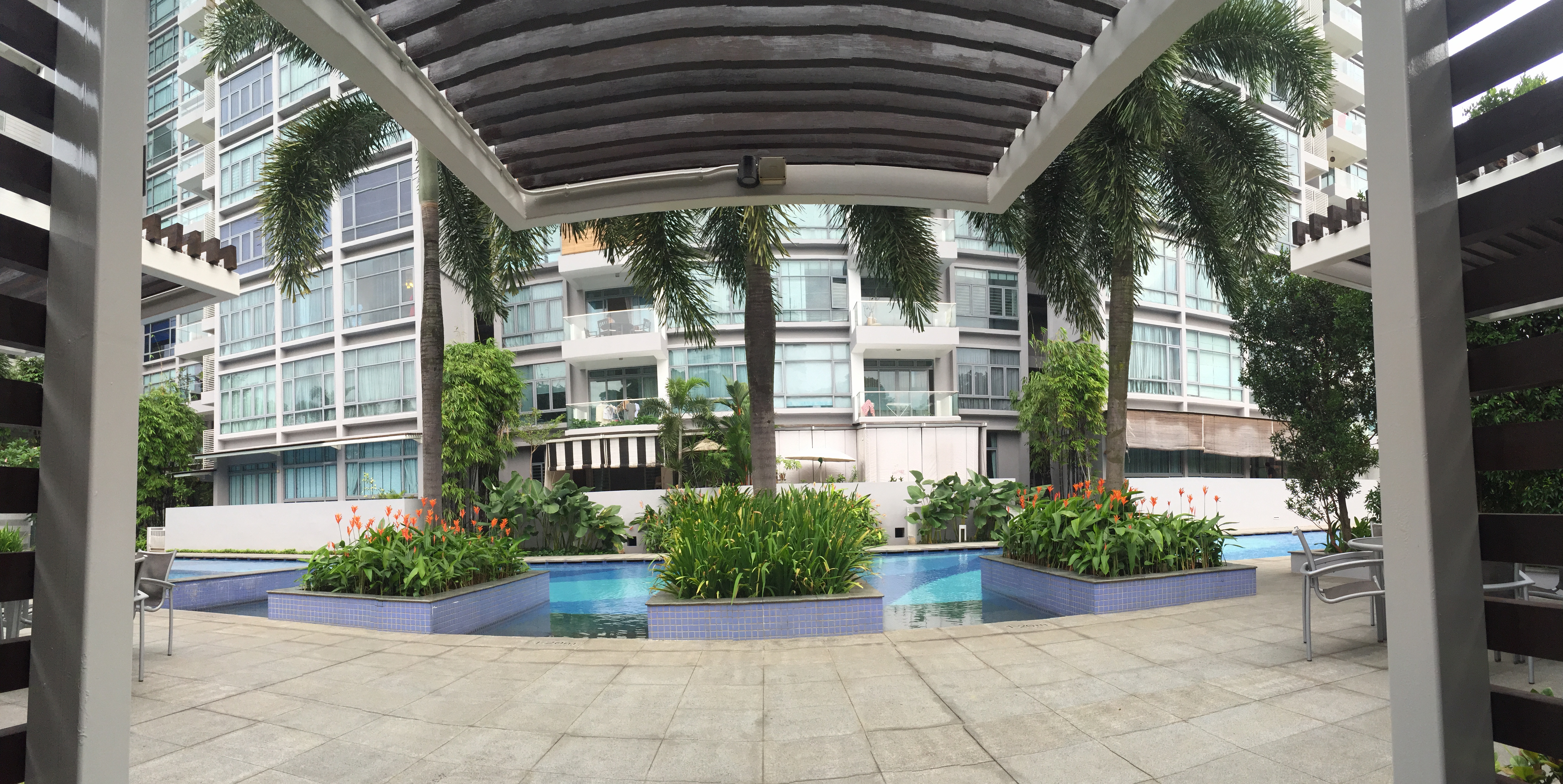 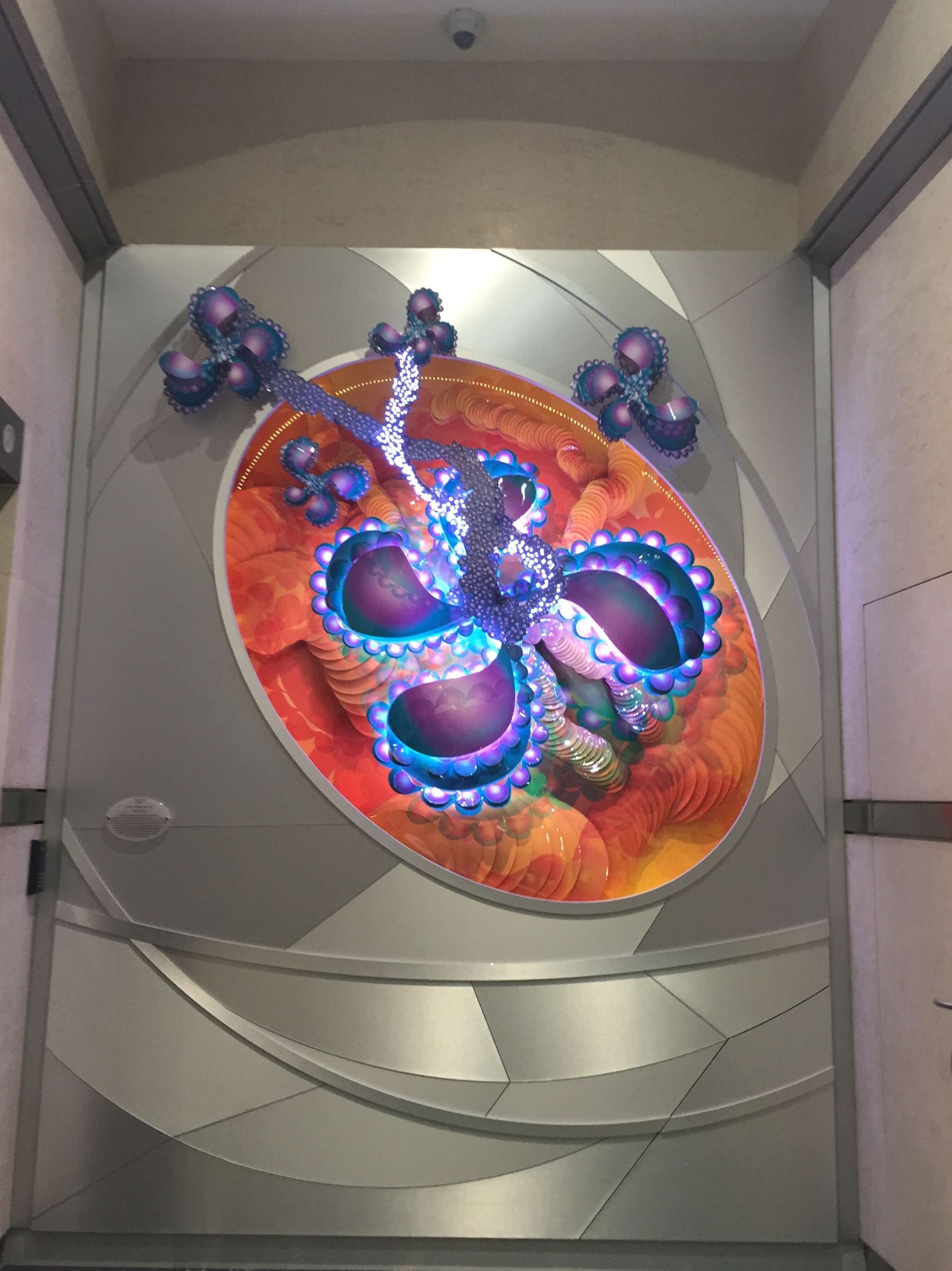 Crazy thing in the elevator lobby at Fusionopolis

The IHPC is at Fusionopolis, a modern building at the one-north MRT. Most of the tennants are research institutions. Lucas Films is also somewhere in the building. There are a variety of eateries and coffee shops downstairs, including two food courts and a full grocery store. I love having Cold-Storage, the grocery store right downstairs. I usually get a salad there for lunch and buy apples, cherries, or blueberries to snack on. Sometimes I get thai food at one of the food courts.

I’ve made friends with some of the other students who are interning at the IHPC: Pat, Vee, and Nop from Thailand, Eric from Singapore, Yesim from Turkey, and Rektah and Ayush from India. Meeting and colaborating with students from around the world has been the coolest experience. Even though most of us are working on seperate projects, we often ask eachother questions. Or atleast I ask them questions lol. I lucked out being assigned to share a desk with Eric. He helped me so much with my program and even took the time to talk me through some critical C++ concepts. I was so grateful for his help when I was hitting the learning curve. Eric is doing a semester at USC this spring, so I’m excited to see him in California :) 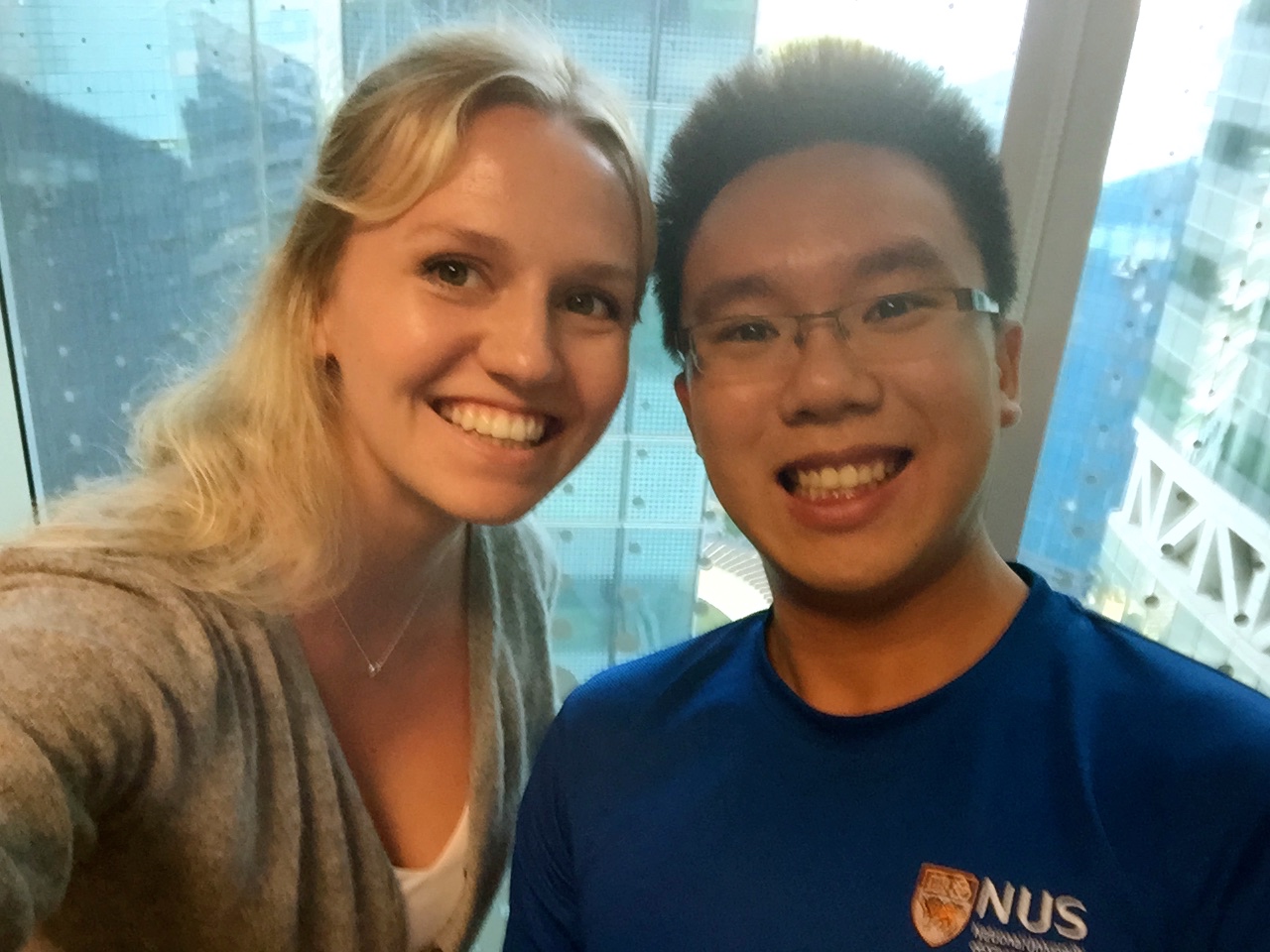 Me and Eric at work

English is Singapore’s official language, but it is considered overly formal and weird to speak “proper english”. Still, pretty much nobody speaks singlish to me because I am so obviously a foreign. Lol. I kept seeing the word “lah” everywhere but I didn’t know what it meant so I had to ask Eric.

Lah:
It’s kind of like an exclamation mark. You just throw it in at the end of your sentence lah! You can pretty much use it whenever you want. I think.

Whenever someone says lah to me I get excited because I would really like to be included in this singlish thing!!

Other cool stuff my new friends told me

I have really enjoyed learning about how student life is different in other countries. Ayush told me about what the whole college admission process in India is like while we were riding the MRT. Students there study for years to do well on a qualifying exam. The students who score the highest get the choice of what and where they want to study. It is similar to SATs in the US, except that admission is based exlusively on that test. The universities don’t care about your essays (there are none), work experience, challenges overcome, or extra curricular activities. Ayush explained that it is actually atypical for teenagers who intend to go to college to work or play competitive sports, since they have to devote all of their after school hours to studying for the exam. Hopefully I’m getting this right. 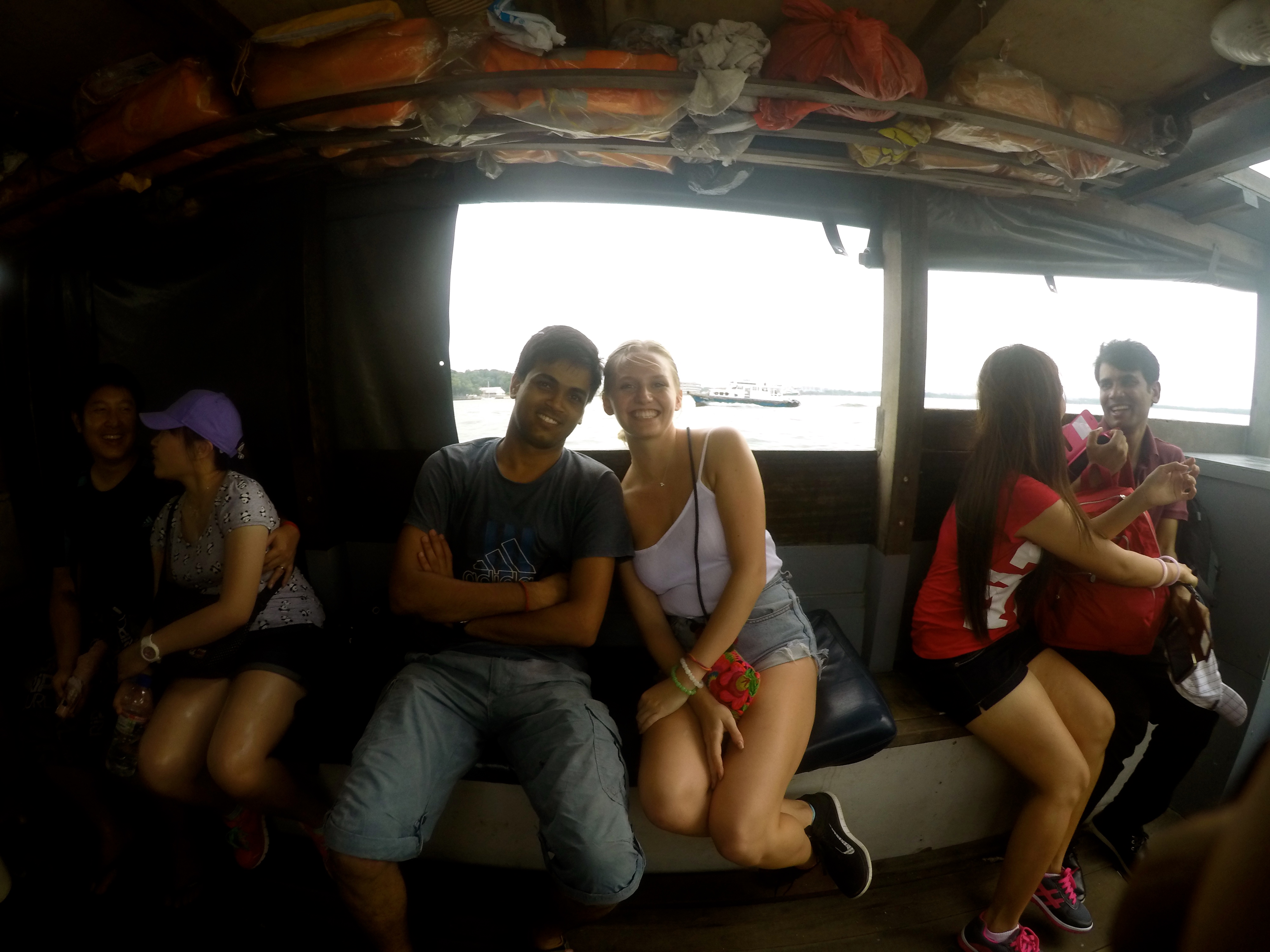 Me and Ayush on a Boat 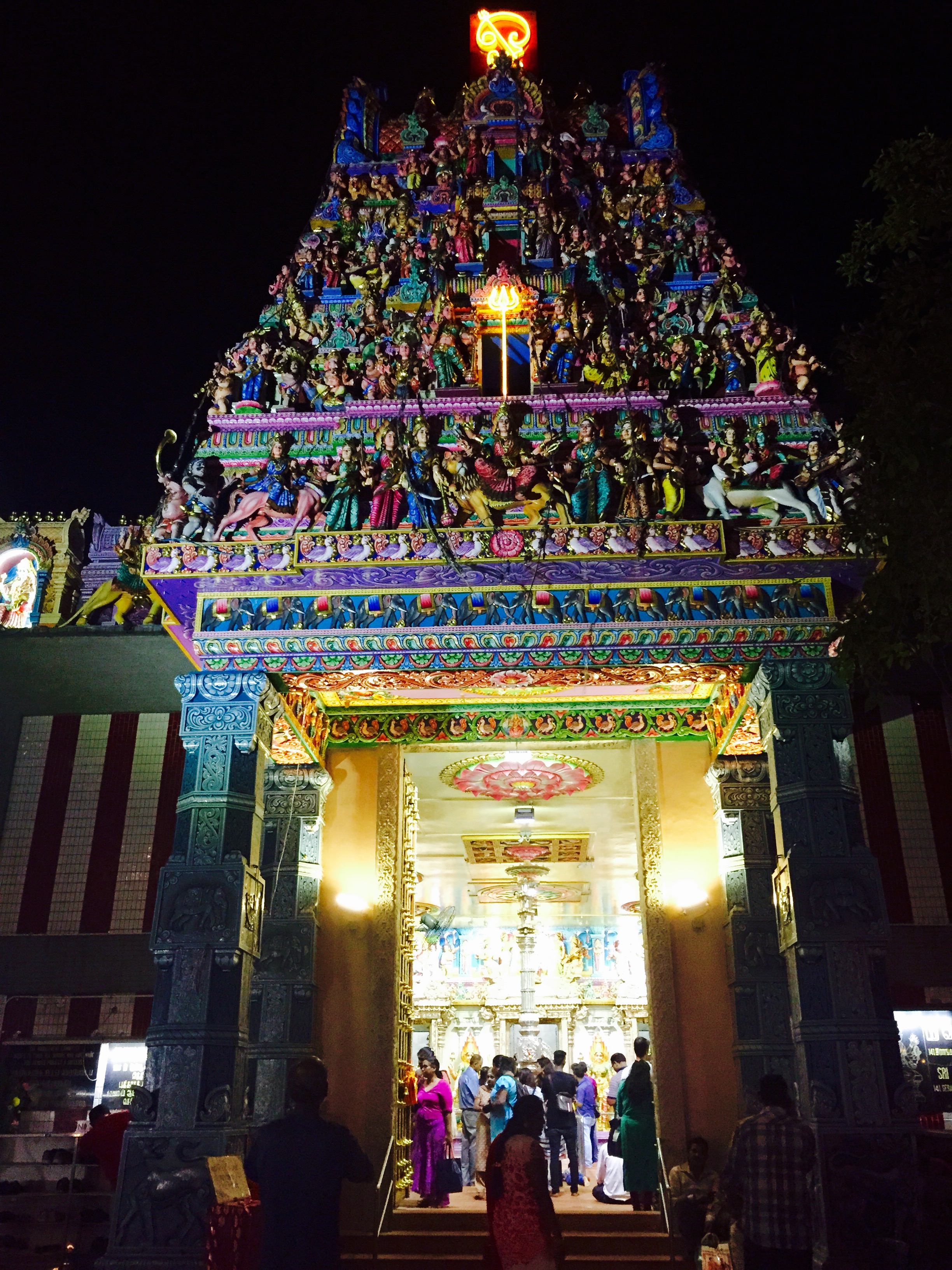 A Hindu Temple I visited with Ayush in Little India. Look at all the colors!

I had so much fun spending time with Ayush and learning about his country. Admittedly, I was surprised at how well we could relate despite being from such different places and cultures. I actually asked him if he knew what sarcasm was. It seems ridiculous now but at the time I wasn’t sure if they use sarcasm in India. Sometimes we got confused by eachother’s accents. Like one time when I was asking if his room had windows, and he kept looking at me like I was crazy. He thought I was asking about “mentos”. I finally started admitting when I couldn’t understand him when he called me out, saying “I think you only get 50% of what I say but you still laugh”!

Here are some more photos from the things I’ve been doing :) 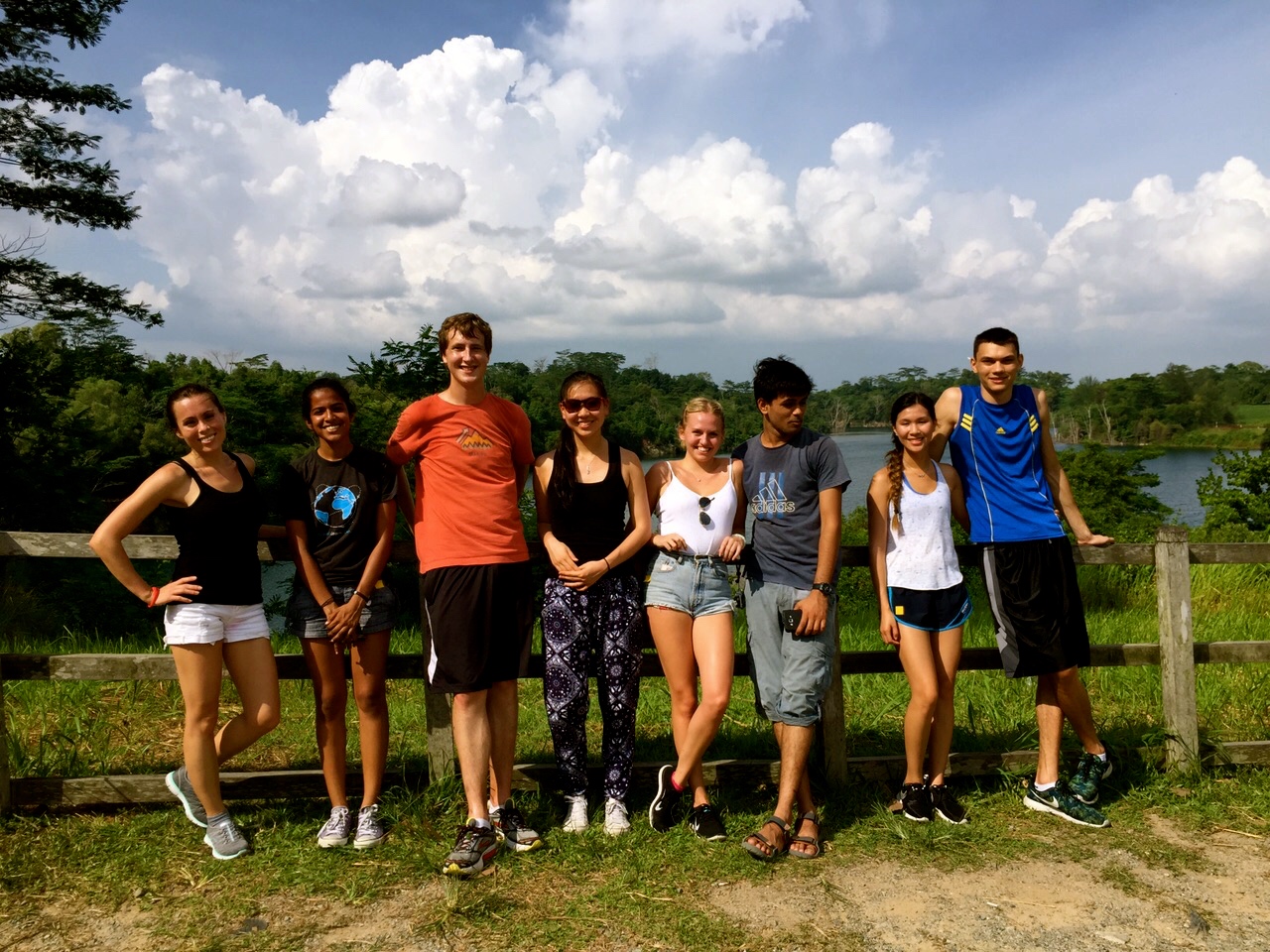 We went biking on Palau Ubin, a little island off the coast of Singapore 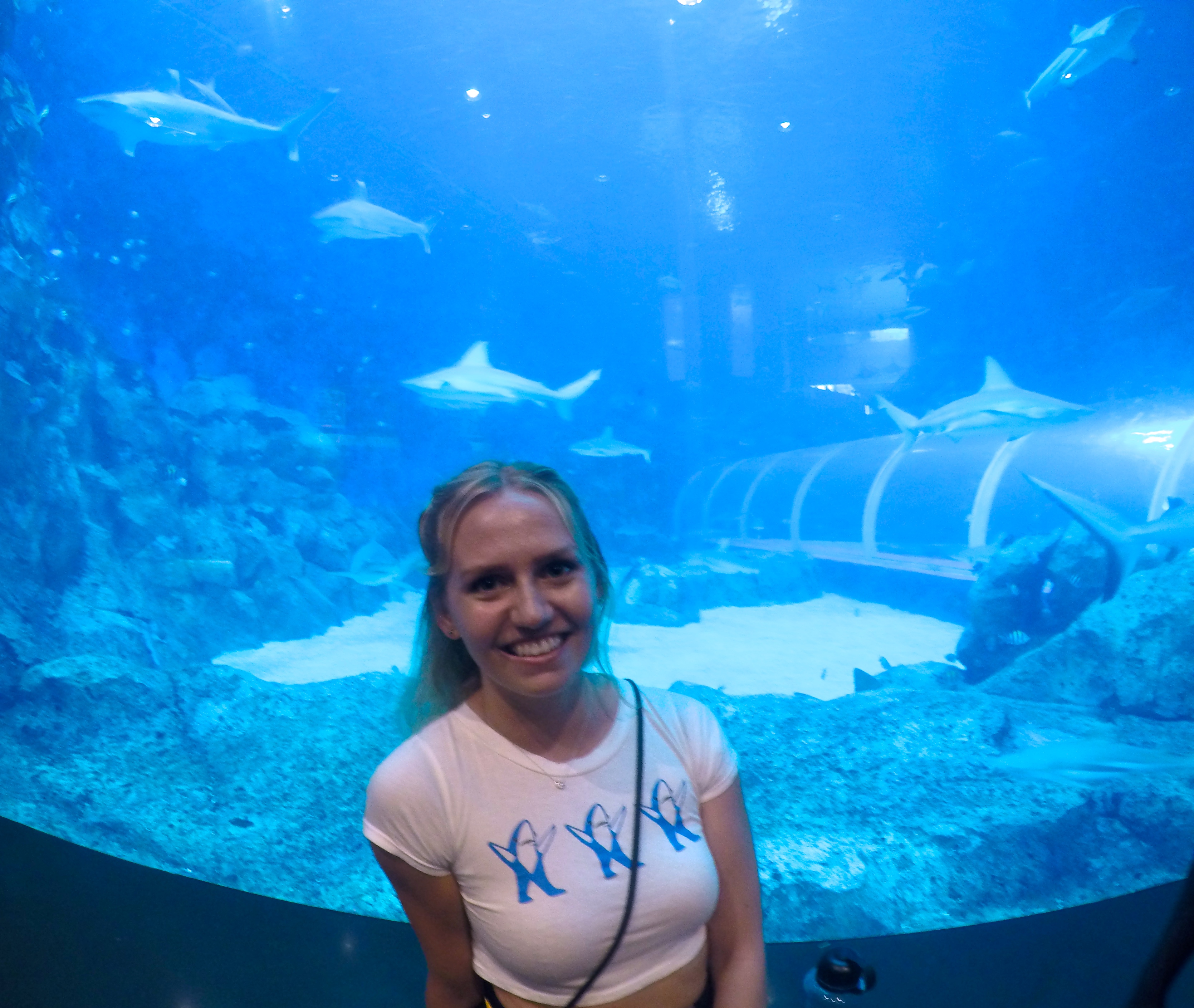 Me in my Shark T Shirt with some Sharks

Glow in the dark with the other UC A*STAR girls 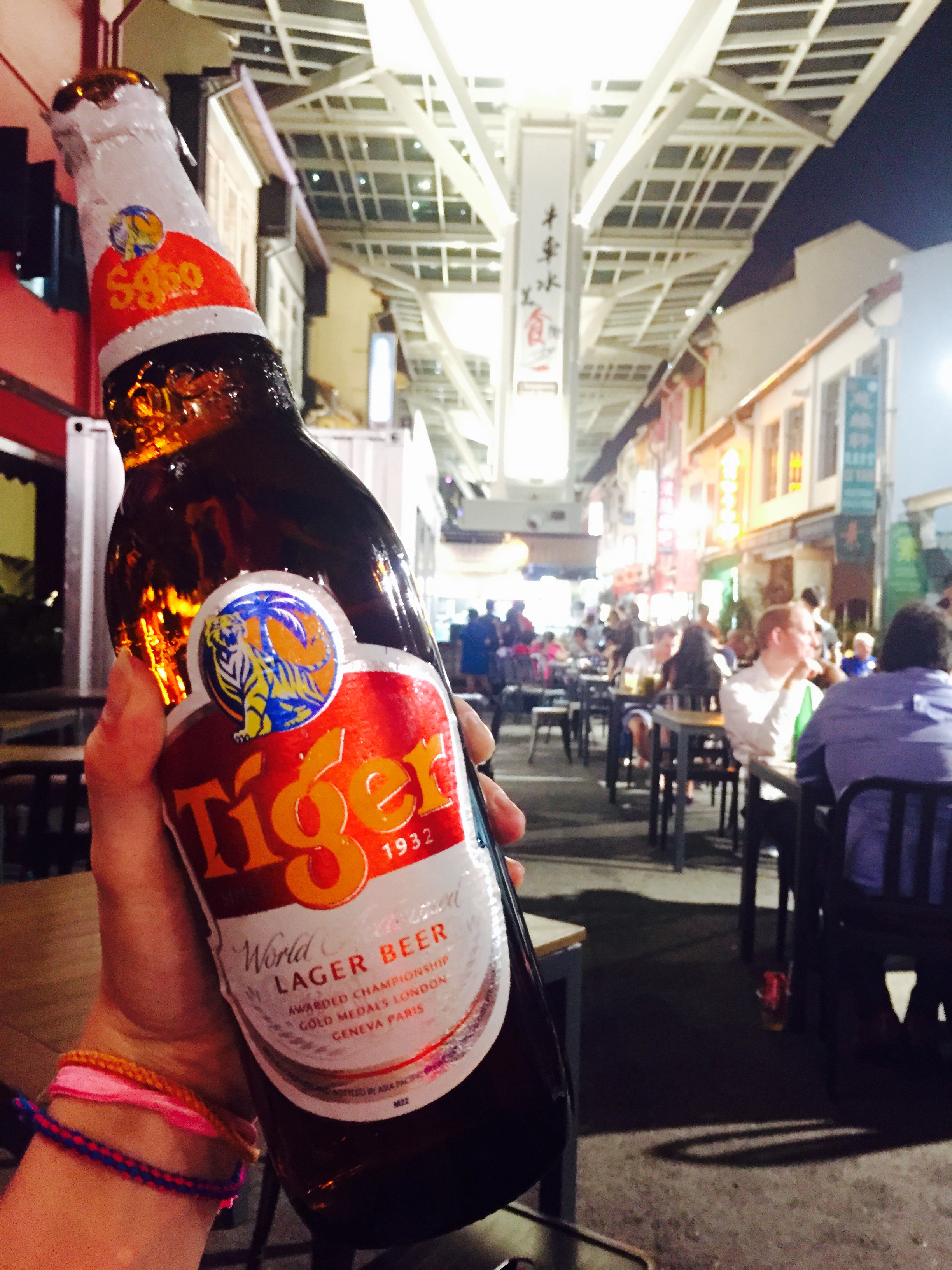 SG50 Tiger Beer in Chinatown with Ayush after work! 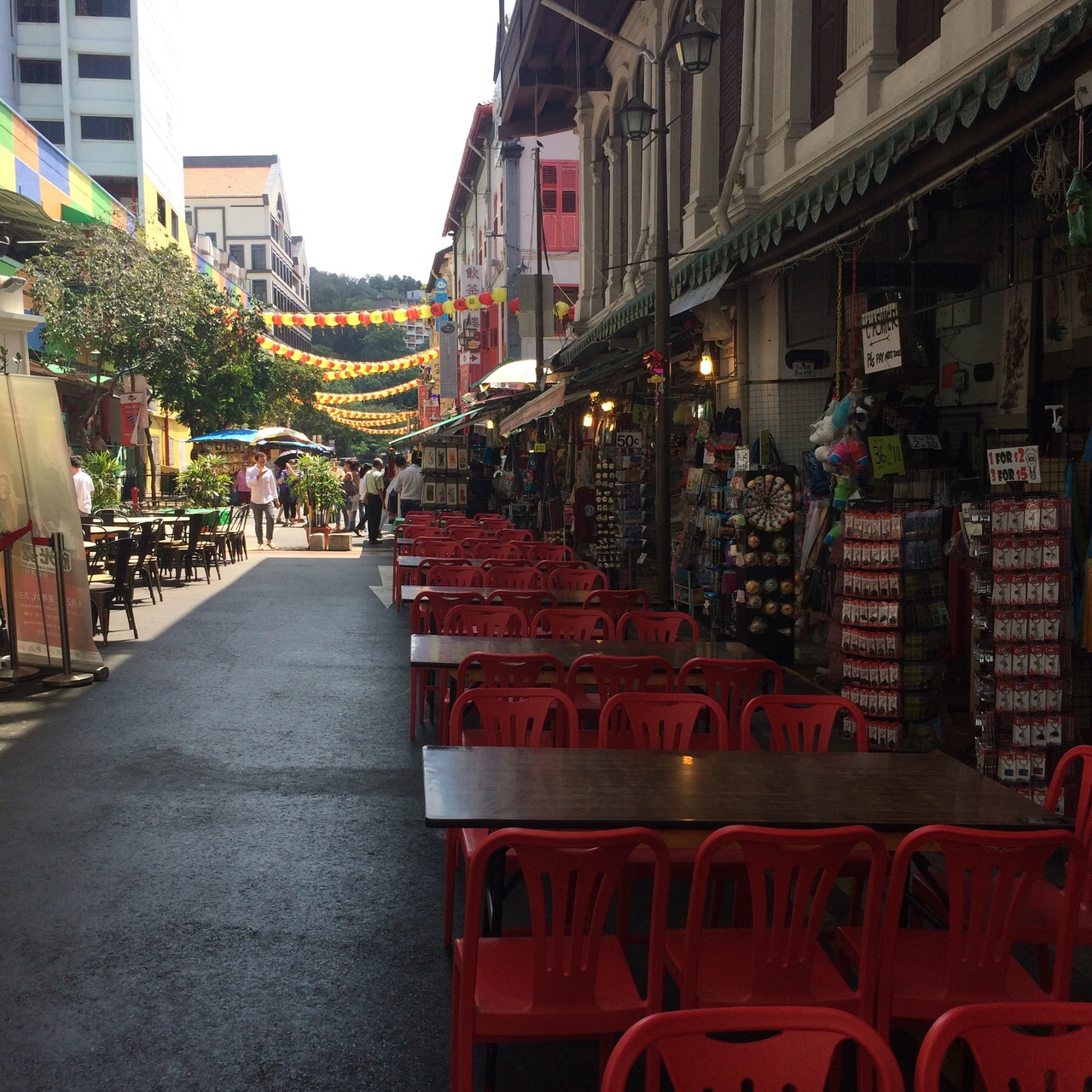 Chinatown during the day 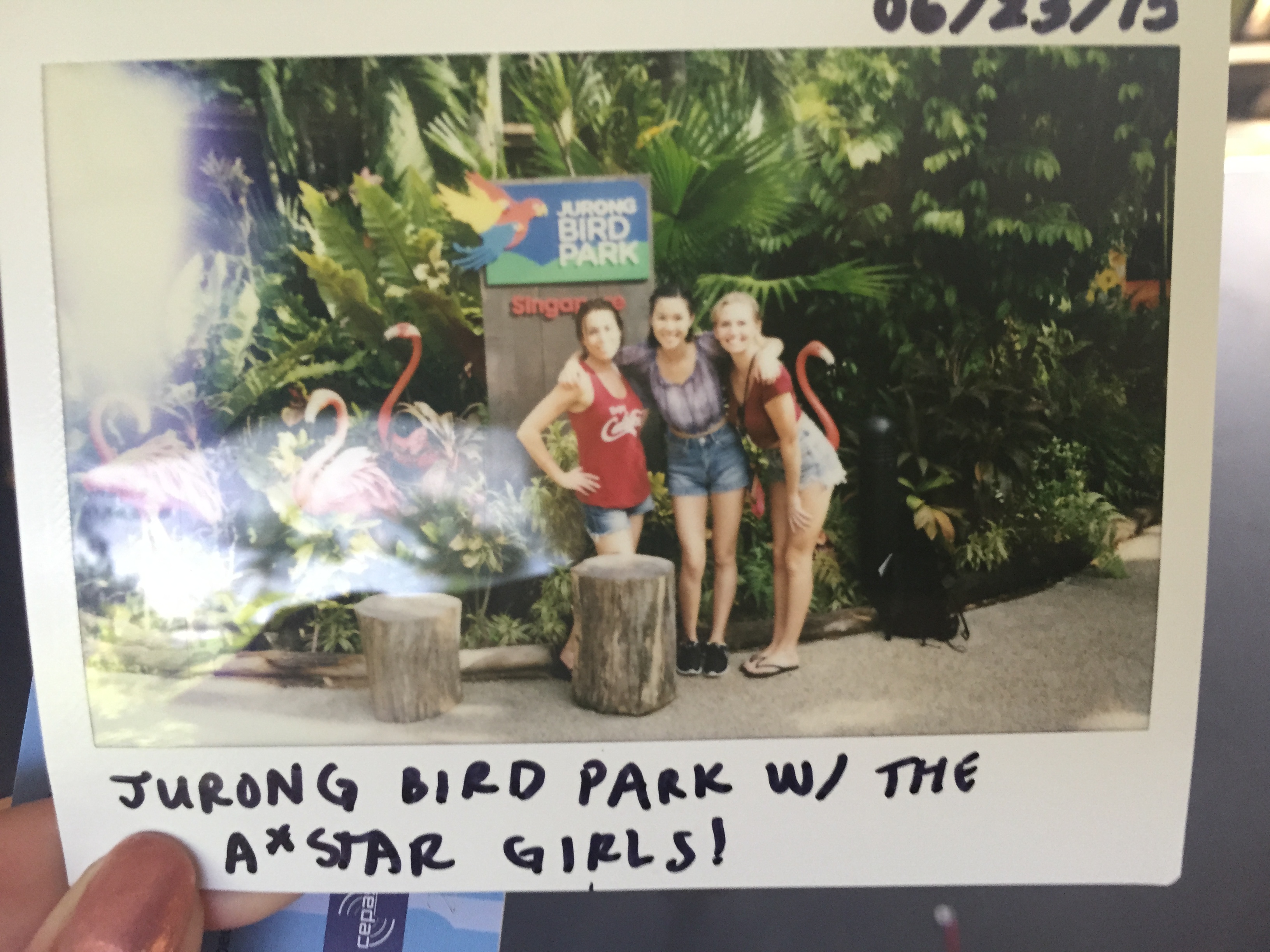 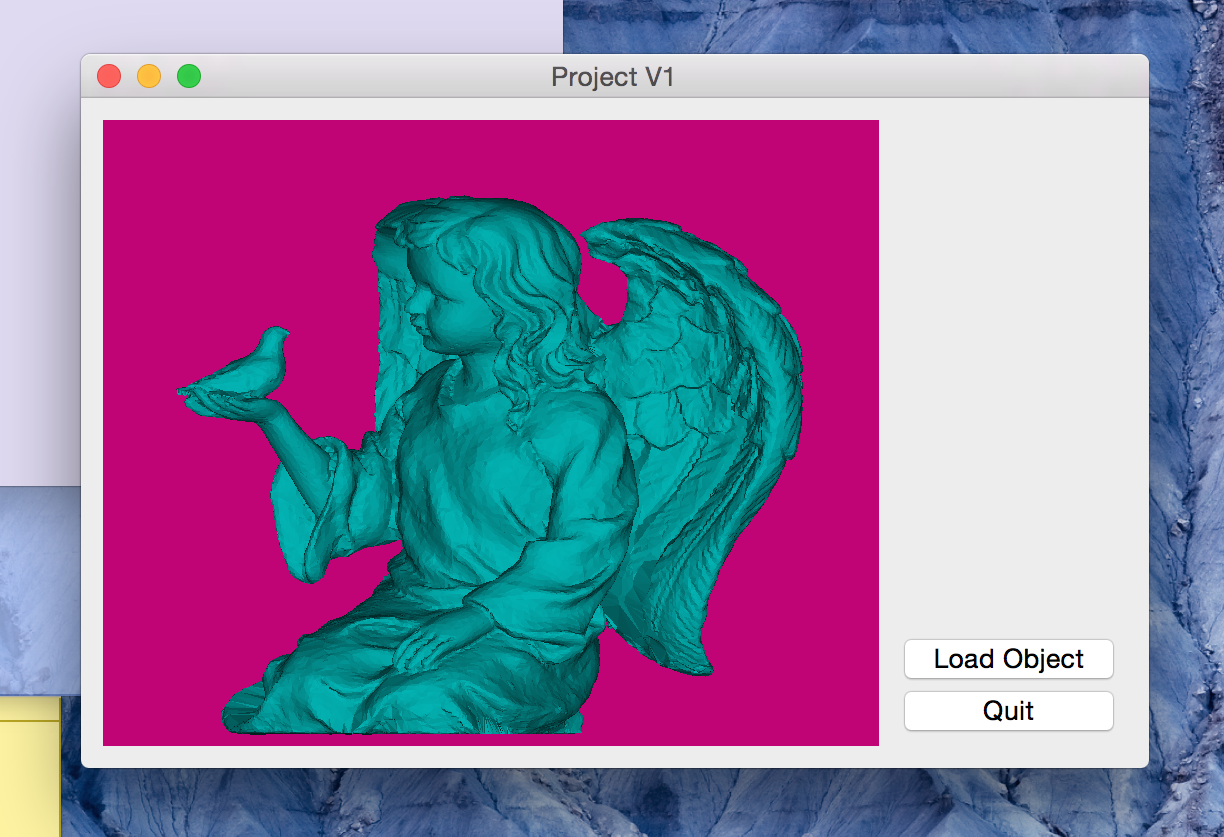