It is winter in Australia, so we were eager for some sunshine. On the 10th of June we left Sydney for Hamilton Island, “the heart of the great barrier reef”. There are no cars on the island, only buggys (golf carts). Our buggy was waiting for us at the airport and we hopped in and took it up to One Tree Hill where our apartment was. Did you know that the premise of One Tree Hill is based off of Hamilton Island?

Just kidding lol. Anyway, we took our buggy to the general store and bottle shop to stock up for the next five days. Everything – literally everything – on Hamilton island is exorbitantly priced. For example, a fifth of smirnoff costs $50 AUD. 200 ml bottle of sunscreen - $21 AUD. However, I was able to save a lot of money on sunscreen because it rained. every. single. day. :) According to the Staff (everyone who works on Hamilton is called “the staff”) it was the first time it had rained in ten months. Ten months!!! So, uneventfully, we spent a lot of time inside. To pass the time I played Texas Hold Em, chess, and black jack with Tony, Jared, and Jared’s coworker Vick. We watched Friends, Seven Pounds, and Myth Busters. I had my eyebrows done and hair braided several times by Shelby. We paced around the house, danced around the house, did body weight excercises, took pictures of the wild birds on our deck, and snuggled. Sometimes I popcorn read my Boov book with Tony. We all talked about our families, views on religion, and differences between Australia and our former perceptions of Australia over dinner. And I jacuzzied in our jacuzzi bath tub. I also ate a lot of Coon Cheese and Milky Bars, and said Coon Cheese a lot because its funny to say lol. There was no wifi on the whole island except at the pharmacy. They told us to shut all the windows before we left the apartment so the Cockatoos wouldn't break in and eat our food. I had a lot of fun riding around the island in the back of the golf cart. One night when it was raining, Jared and Tony convinced me that the golf cart was losing power on our way up One Tree Hill. They told me that we hadn’t plugged it in for long enough, and that I needed to hop out and give it a push … lol you can guess what happened next. 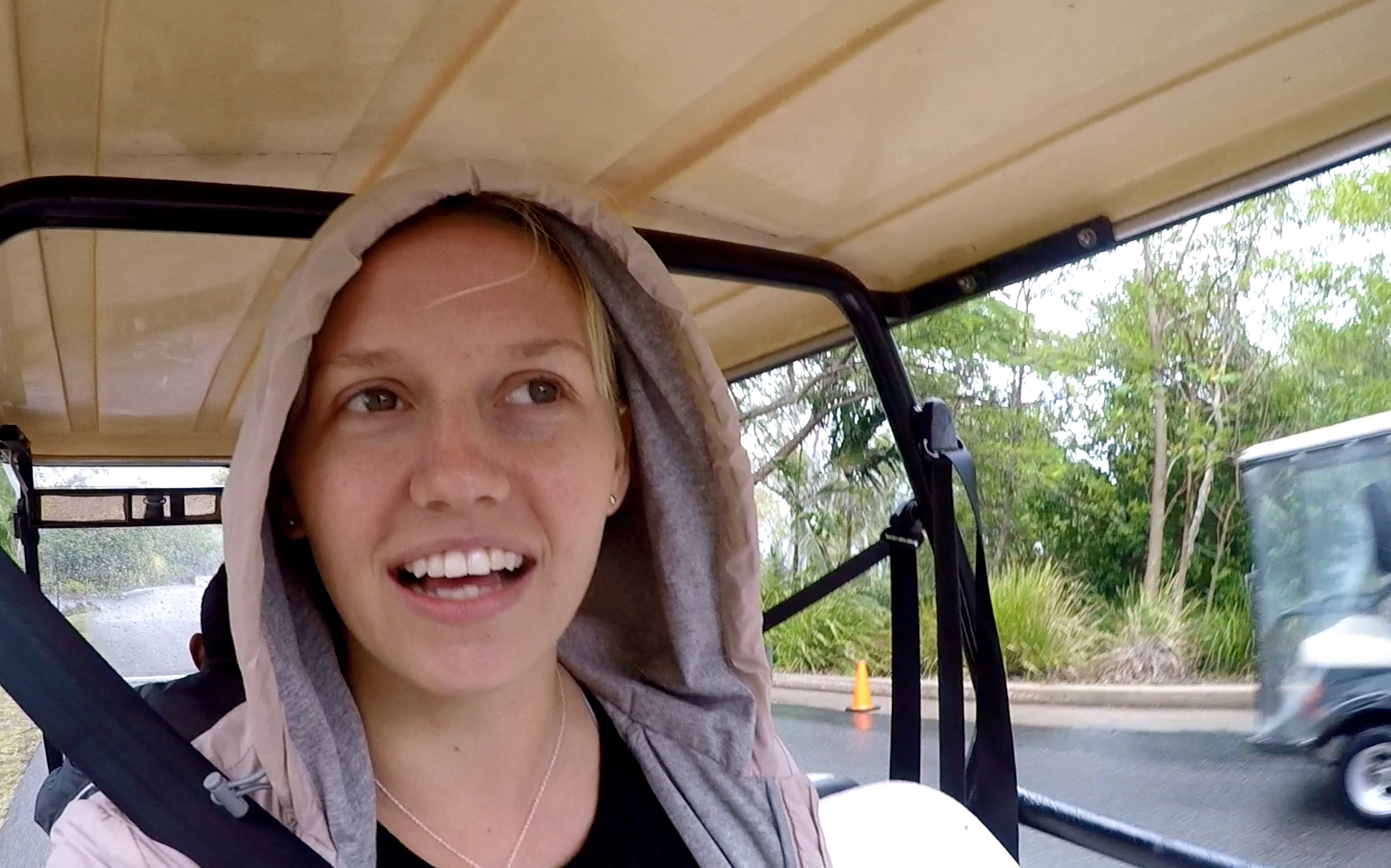 I wonder if it will ever stop raining ...

Usually, as soon as we opened the door to leave the apartment it started pouring rain. We did manage to make it to the beach and jacuzzi and pool for a little while on some days. The girls and I went shopping for flip flops because I lost mine in Thailand and Jaquline and I both broke our shoes at the bar one night. On the second day the apartment flooded when we tried to wash towels (not our fault), so we moved to a new one with a nicer view and an extra bedroom. Vick, Jared’s friend from work, brought us barbecue, grey goose, red bull, and played cards with us sometimes. On the last day, we took a tour to the Great Barrier Reef. It turned out we were actually kind of lucky because it was the first time the tour ran in two weeks, due to high winds. It was about a two hour boat ride to the reef. In the open sea it was very choppy, but when we arrived the reef protected us from the waves and the boat was still. This was my second dive ever. My first time was over spring break in Catalina. I was pretty nervous once we got in the water, but I was with one of my best friends who is a lot braver than me. I didn’t realize how reassuring that was until this dive!

This time, I dove with a random guy who was telling me he was worried about panicking under water. He was really impressed that I was calm enough to eat a muffin while we were getting ready. I was trying to reassure him but his nervousness was starting to make me really anxious!

Right before we jumped off the boat, he was tripping about his mask falling off. I was trying to ignore it and watch the giant trevallys that were swimming right beneath our boat.

As soon as we started descending, he started making frantic looking gestures to our instructor and pointing at his mask. At this point his freaking out was really freaking me out so I turned around and watched the fish while they sorted it out. From that point on I tried to look at him as little as possible. Lol. Cheesin' with my Pink Fins

In the middle of the dive, I lost my regulator (the thing that you breath out of). My instructor was ahead of me and I couldn’t reach her to get her attention. Now I was the one panicking! My immediate instinct was to try to talk, I think, because I proceded to open my mouth and start guzzling water. After I swallowed about a half gallon it occured to me that I could just put the regulator back in. I recovered the regulator, exhaled to clear the water from it, and proceeded to breathe normally. Now I was feeling bad for my partner because if he had lost his regulator in front of me I probably would have had an anxiety attack.

Even though I didn’t descend as deep as my first dive, it was a more intimidating experience for me. But I left feeling much more confident about my ability to not drown or freak out while I dive. Afterward Kellie, my instructor, complimented how quickly and “calmly” I recovered my regulator, which made me feel good :) 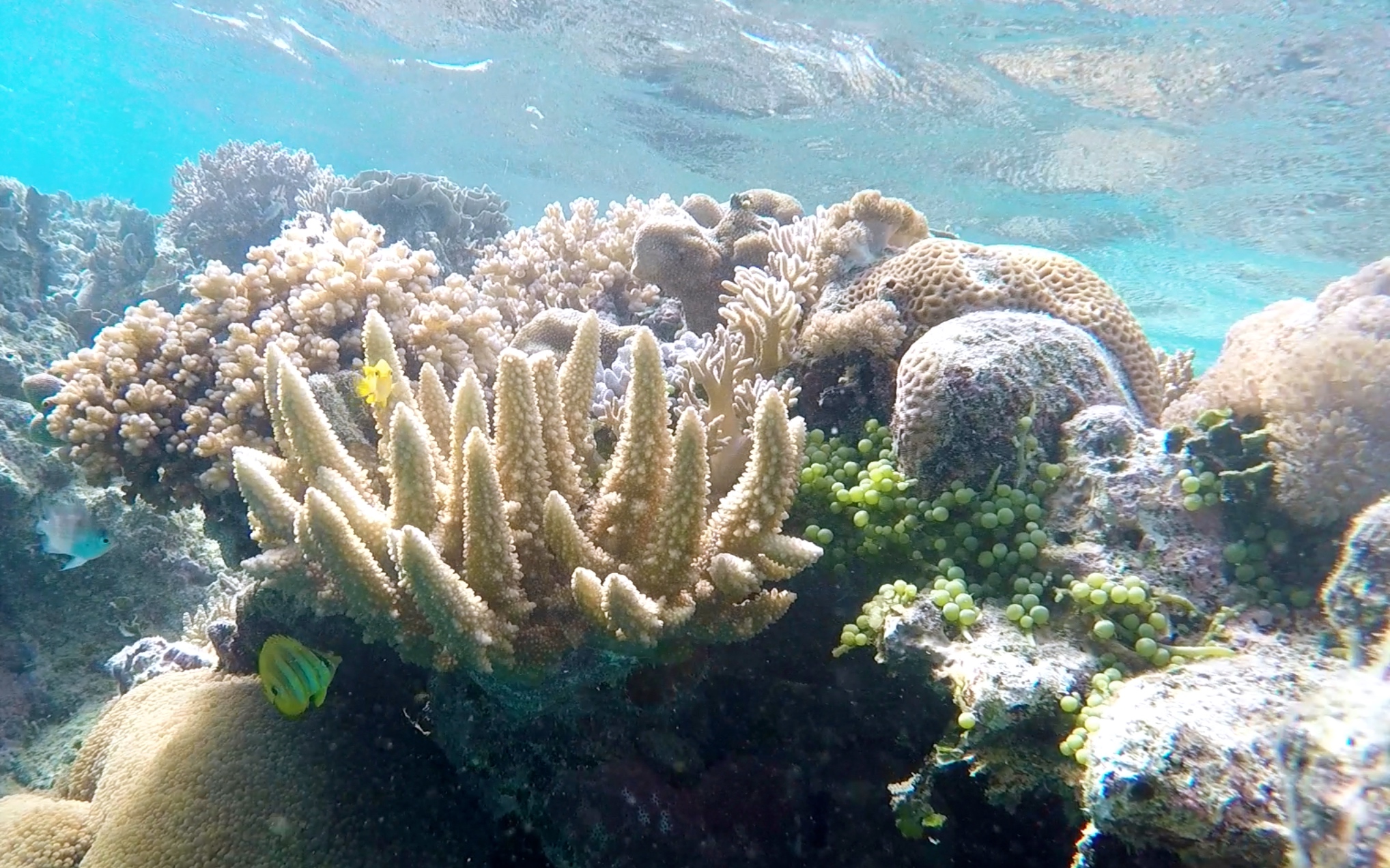 The rest of the dive was incredible. The coral was brittle and sharp and tangled together in big bushes, like Maleficent’s thorn walls but in technicolor. There were whites, reds, pinks, purples, and blues. At one point I was completely surrounded by lavender coral shaped just like the flower. It was like being in a garden with hundreds of butterflies, except the butterflies were fish. The contrast between the little bright yellow and shining teal fish and the coral was stunning. It is hard to describe how amazed I was every time I came upon a new color of coral. I saw the biggest and most vibrantly colored parrot fish, giant trevallys and that were longer than the span of my arms, clownfish hiding in sea anenome just like nemo, fish that were totally transparent, white fish that blended in with the sand, black fish, huge unfortunate looking seacucumbers, giant clams, shining silver fish as big as the giant trevallys, schools of fish masquerading themselves as seaweed, I could go on and on. It was the most spectacular diving/snorkeling experience I could ever imagine. 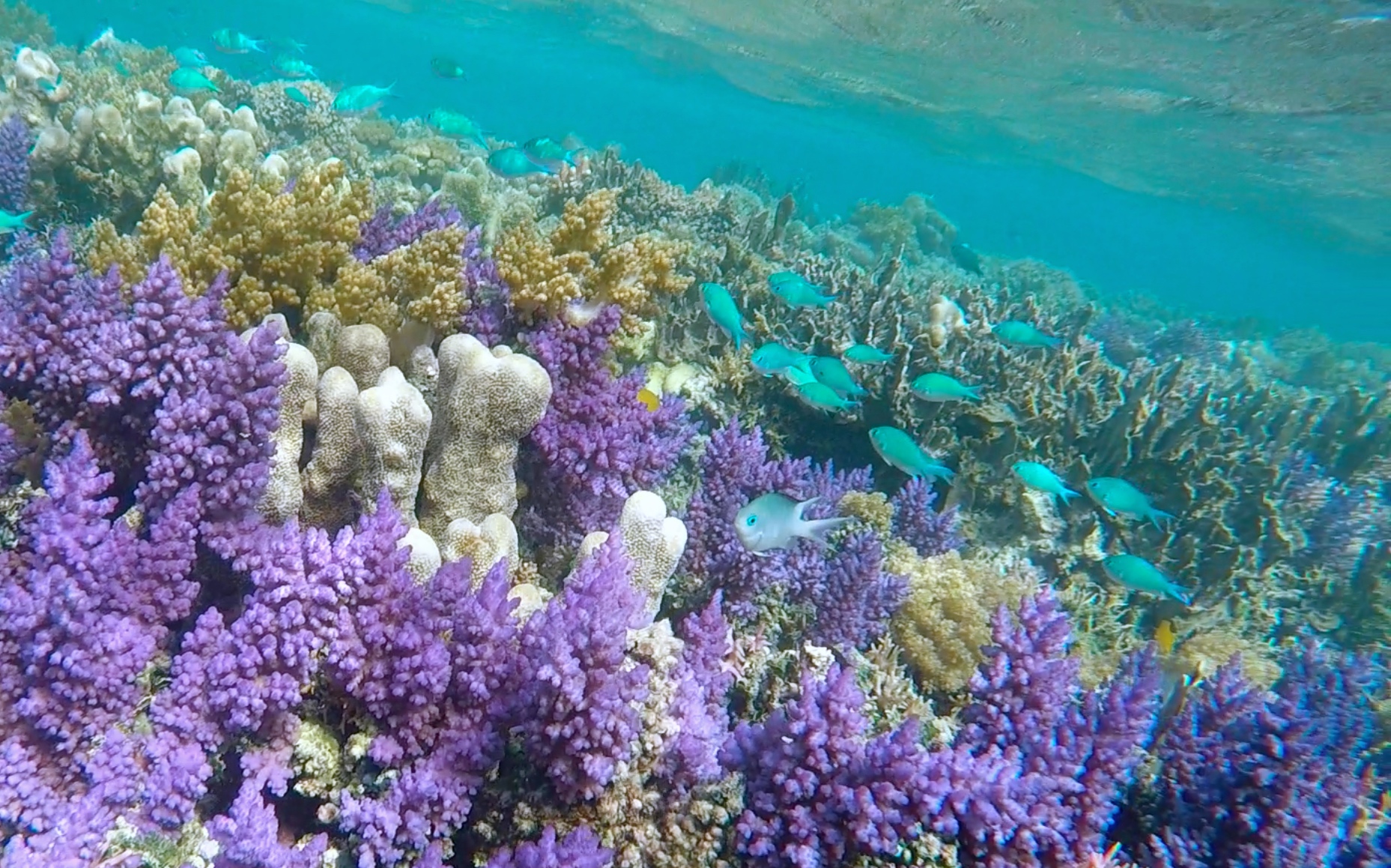 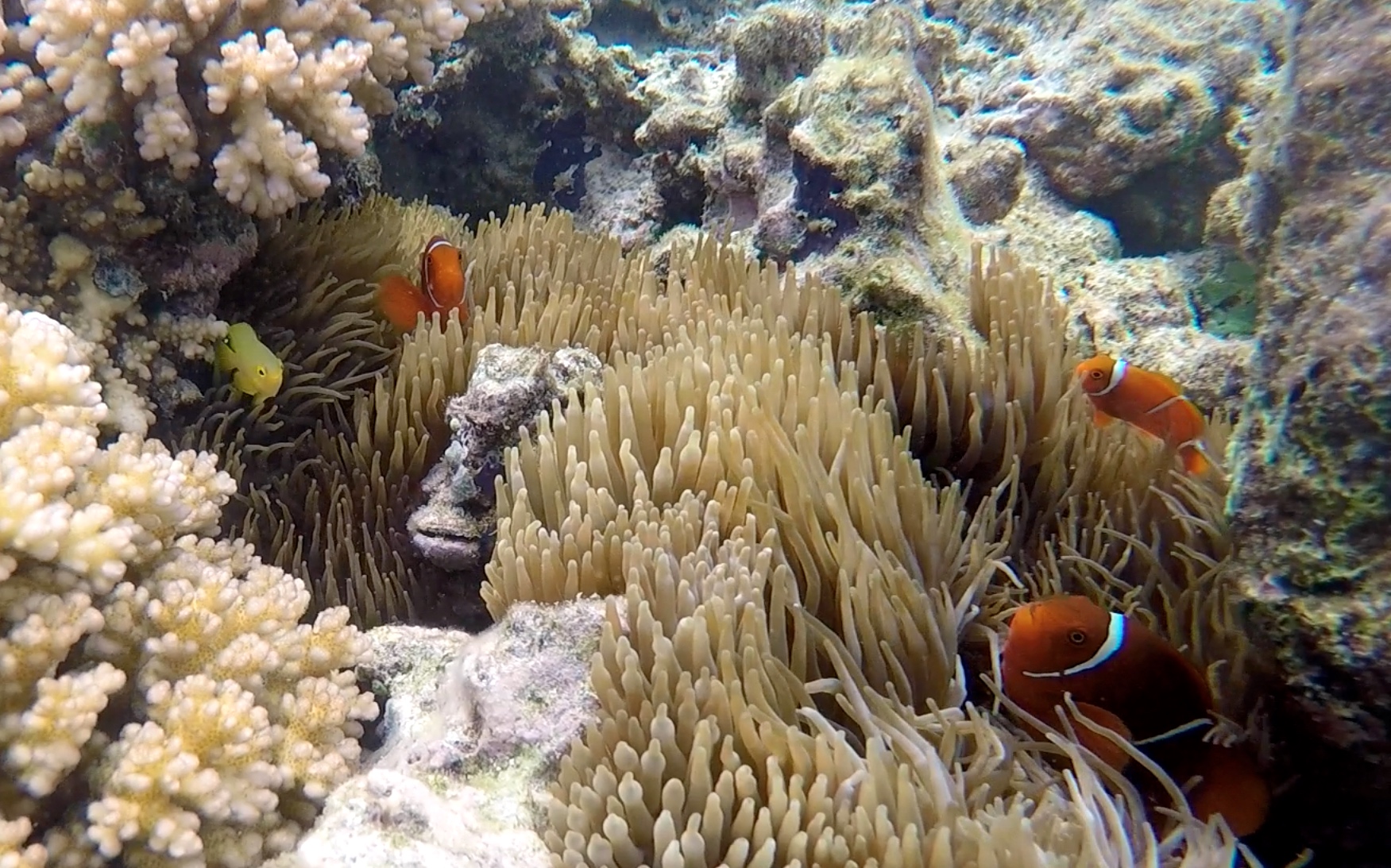 After about 40 minutes of scuba (felt like 20 minutes), we had lunch and tea on the boat and enjoyed the view from the top deck of the boat. Then I got to snorkel for an hour and a half and enjoy the reef some more. On the ride back to the island, I kept smiling to myself because I felt so grateful for such an amazing exerience. View from our Deck

After our trip to the reef, we had some drinks and went to a little block party that was marking the end of a kayaking event. It started raining again, but Tony and I stayed to dance and watch the band and make new friends. I even got lei’d a few times :P When we got back to Sydney, Jared kindly treated us to an amazing dinner. The only thing was I felt kind of bad for my dinner since I just got done swimming around with all the fishys. Finally, Johnny brought us for dessert at Gelatissimo one last time. I got cookies and cream and white chocolate again :) What a good looking bunch we are
Tony, Me, Johnny, Shelby, Jared, Anne Marie, and Jacquline :) Did that make you lol? Did it make you shake your head? Did you stop reading after the first sentence because you were already bored? I want to know what u think!!!!!!!!!!! You can comment as a guest!