A Demonstration of my Project thus far

My project is a C++ program that reads in data describing 3D models, in .obj file format, and renders and lights the models with OpenGL. Since my last post, I have implemented some user interactions and use of the CGAL data structure. The models I use to test my program came from the UC Berkeley Computer Graphics website :)

Now, whenever a new .obj file is selected, the “camera” automatically centers the model and makes it fit on the screen. I say “camera” because there is no actual camera in OpenGL. Instead, you manipulate the view by applying matrix transformations to the modelview and projection matrices. More on that later. I wrote a “camera” class, which handles these transformations.

I think this is probably the least noticeable new feature, but it was one of the bigger challenges. If you watch closely, you can see that when I resize the window in the video, the cube retains its shape. In otherwords, it doesn’t turn into a rectangle if the viewer isn’t perfectly square. You might also notice that the angel is more slender than before. 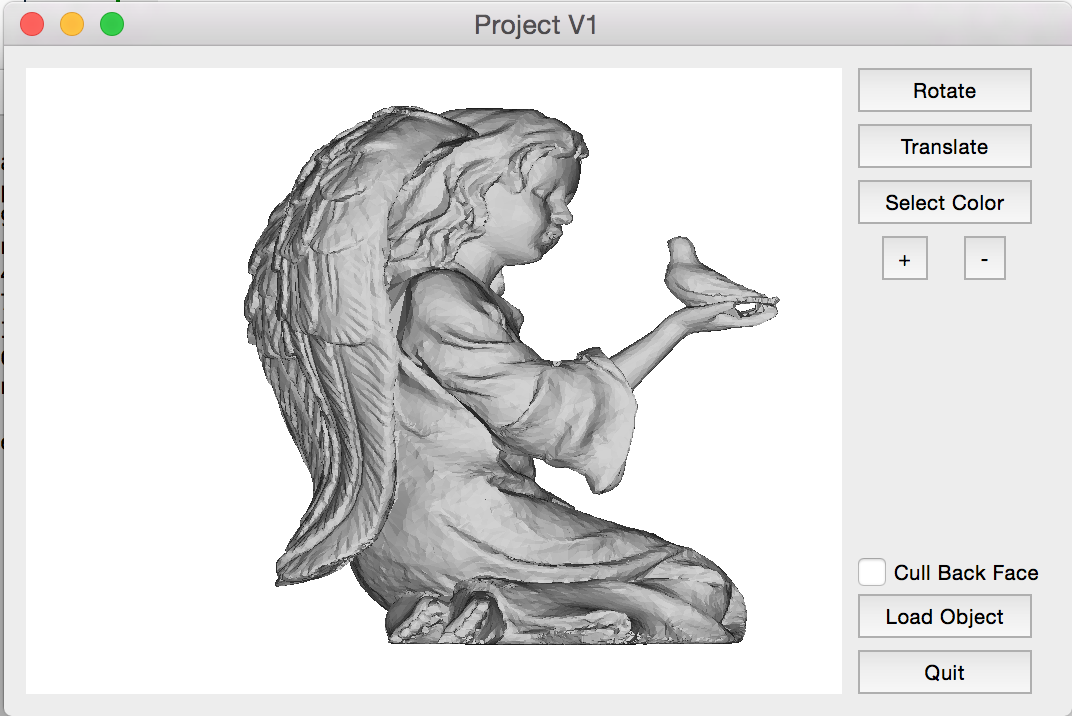 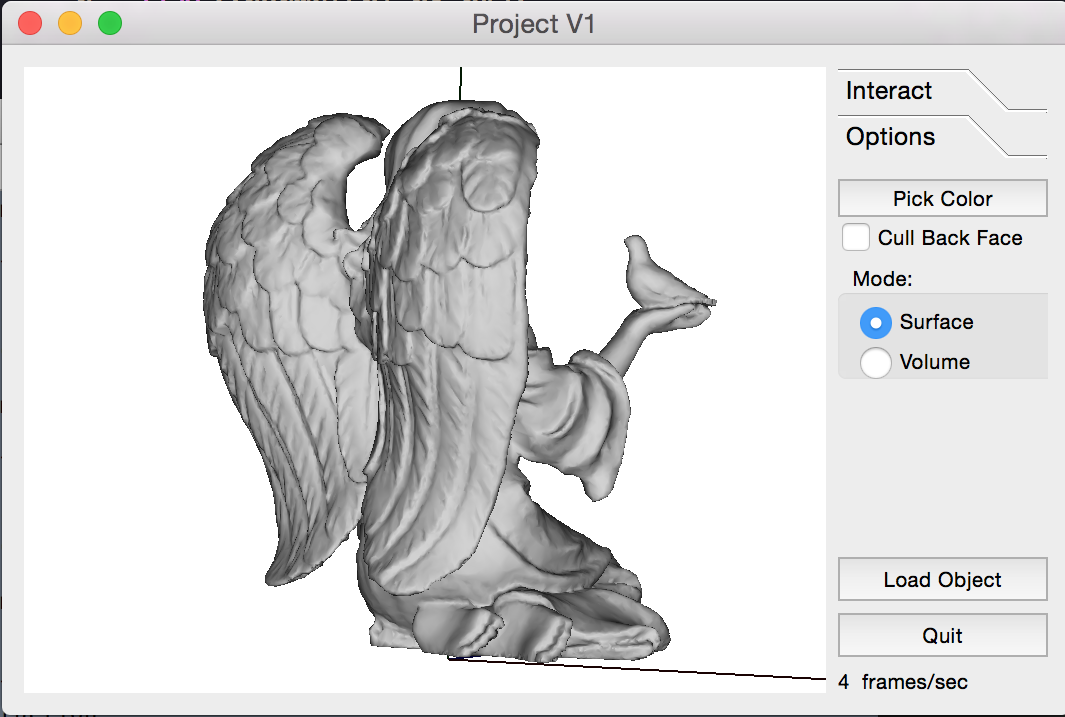 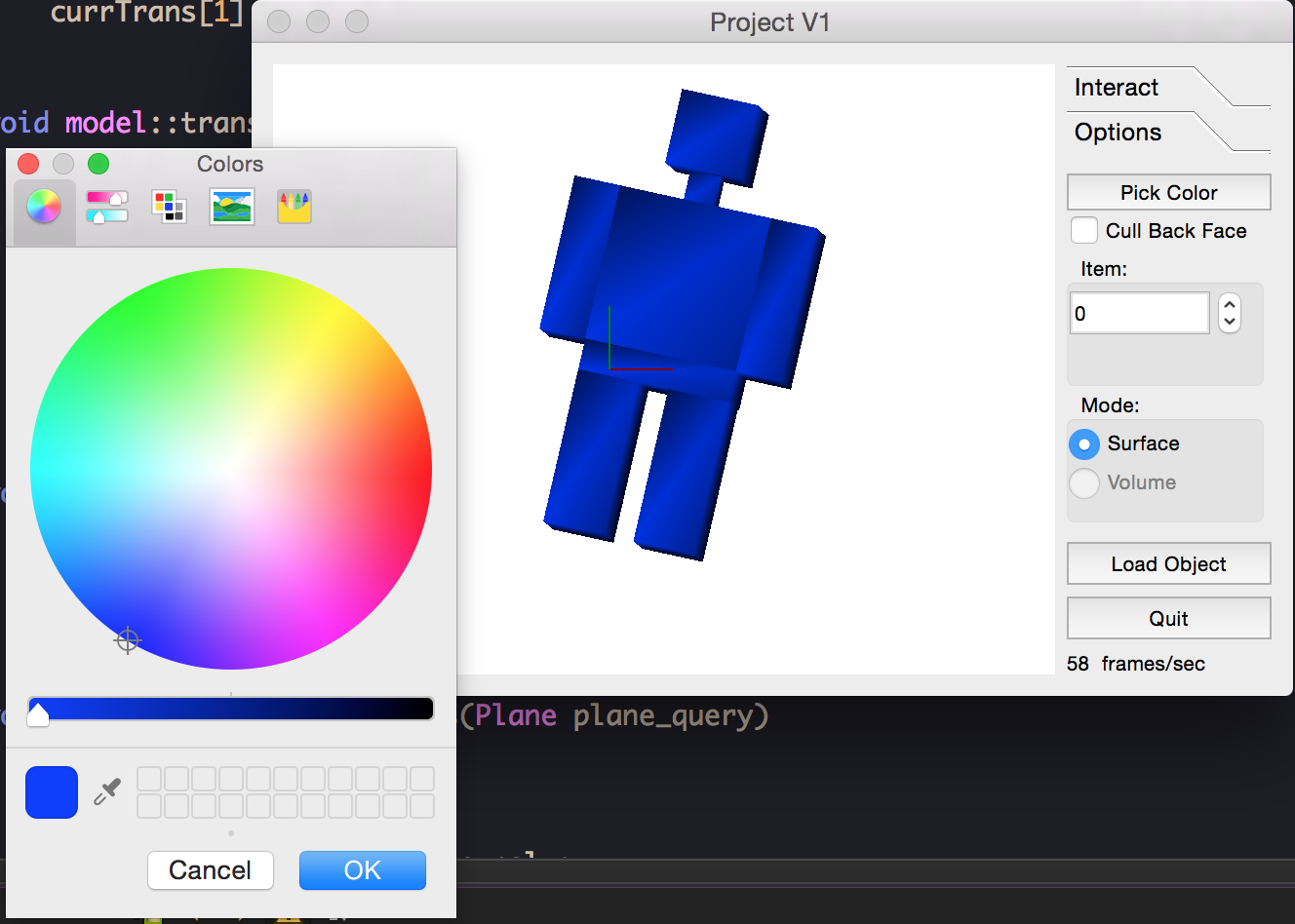 To me this feature seems more impressive than the constant aspect ratio, but it took about five minutes to implement. Thanks to QT, color picking boiled down to two lines of code.

ui is the User Interface, widget is the part of the ui that displays the model

Ok, I had to write grabColor too, so maybe 5 lines. Still. I actually threw this feature in because I needed a break from some other issue I was stuck on.

In my last post, I mentioned that every vertex needs a normal vector so openGL knows how to shade the model. At that time, I was just computing the normal for each face and lighting all of the vertices in that face uniformly.

Before and After per-vertex shading

I expected understanding the openGL calls to be challenging, but I didn’t anticipate the challenge of making the controls intuitive. I guess this speaks to the idea that the best computer graphics go unnoticed.

The user controls are simulated by a series of repaints. Actually the model is being redrawn constantly, but without adjustments to the modelview or projection matrix, it is just drawn exactly the same. So my goal is to animate, or redraw, the model so the user feels like they are actually touching and manipulating the model with their mouse.

Getting the model to rotate wasn’t hard. I could just use glRotatef to do that.

The first problem is glRotatef rotates the model around the origin, the point (0,0,0). This gives the appearance that the model was orbiting about an arbitrary point in space. Not what I want. I want the model to rotate about it’s center. That way it stays where it is and just spins around.

There is a clever trick to accomplish this. Since glRotatef rotates about the origin, you can just move whatever point you want to rotate about to the origin, apply the rotation, and then move the object back to where it was. Imagine I pick up the model, move it’s center to the origin, rotate it, and move it back to it’s original point in space.

Pretty neat trick! But still, I am left with a model that is rotating in crazy unpredictable patterns.

The rotations seem accurate at the beginning of the demo, but soon deviate from what is expected. You can see that the effect of dragging the mouse in one direction (like left to right) is inconsistent as time goes on.

This is because the rotations are accumulating.

We want each mouse drag to produce a new, independent rotation. So when I drag the mouse from left to right, the model spins right, regardless of the rotations I performed previously.

As is, the rotations are adding on top of eachother. So when I drag the mouse left to right, the model spins according to the sum of the prior rotation and the desired left to right rotation. Confusing right?!?!?!?!

Here, the openGL matrix stack comes in. Here is the deal: In order to rotate my model, I am manipulating the Model View Matrix. But openGL actually maintains a “stack” of Model View Matrices for me to work with. If I want to save my current matrix, I can “push” it to the stack. Then, I can change the matrix however I want. When I decide that I want to go back to that matrix I pushed earlier, I can “pop” the matrix and I will get the next one on the stack. More confusion, no?

Let’s pretend that coloring is a matrix operation. So I start out with a regular white model view matrix. I call glPushMatrix(). Then I paint the matrix yellow.

Next, I decide I want a red matrix. If I just start using red paint to my yellow matrix, I am going to end up with an orange matrix. So, first I call glPopMatrix(). Now I get the white matrix back, paint it red, and I have a true red matrix.

Now, I call glPushMatrix() again. I want to turn the matrix purple this time. So I paint this matrix blue, and get a purple matrix. Now I want a green matrix! But I don’t want to slather green paint on a purple thing.

I keep track of the current Quaternion (represents the current rotation) by multiplying the new, applied rotation by the former rotation
This way, the next time the model is drawn, the rotation is applied to the original, "white", matrix.

My first idea was to use glScalef on the Model View Matrix to zoom.

That isn’t quite right. Here I am actually changing the size of the model, rather than getting closer or further. This is kind of like the desired effect, but if I get too close holes start appearing in my models. By scaling the Model View Matrix, the model can get so big that parts of it would lie outside the clipping planes.

Instead of adjusting the Model View Matrix, I need to adjust the Projection Matrix. Doing so changes the way I view the “world”, as opposed to changing the model itself.

That’s it for now :) My next post will show my final project! 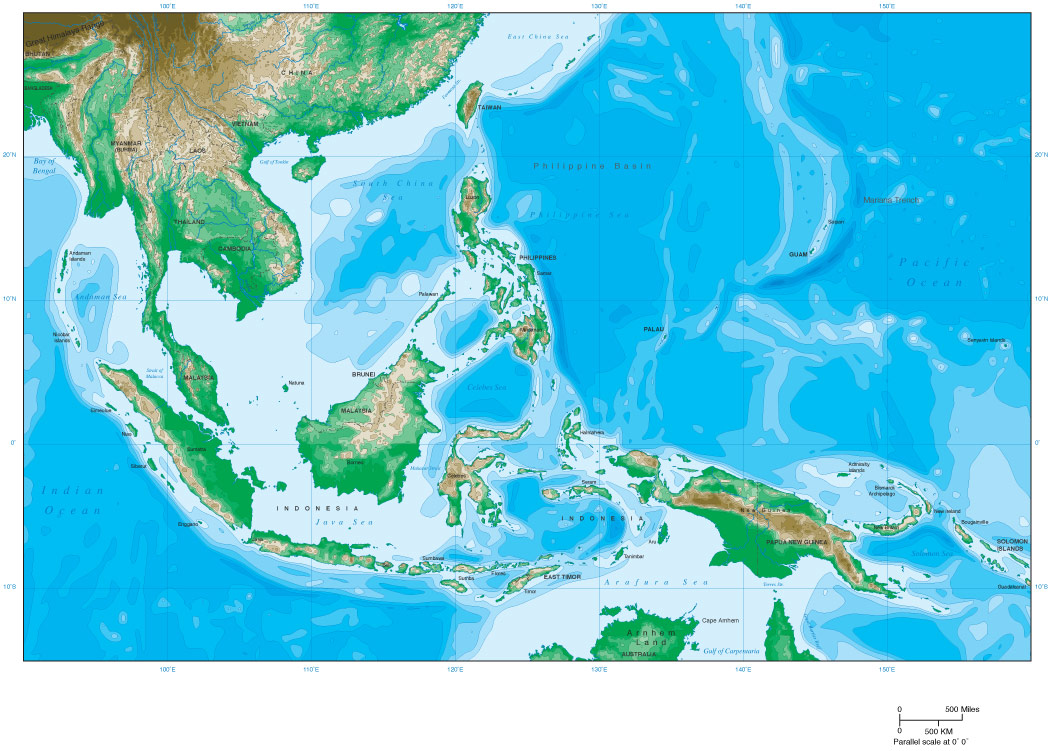